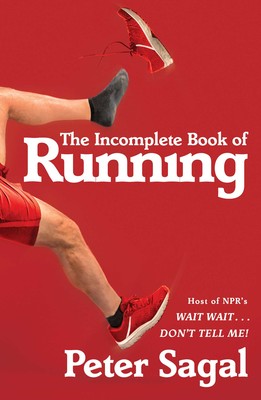 “The Incomplete Book of Running” speaks well to the stereotypical middle-aged male, married with 2.5 kids, and runs to find peace (there certainly are a lot of us). Based on the number of occasions I found myself Googling definitions, Sagal is a true wordsmith. In a therapeutic sense, he uses these pages to navigate the divorce proceedings he’s processing. The title, “The Incomplete Book of Running”, is appropriate. It’s a scattered collection of (mostly) running-based topics. Throughout, Sagal invokes his great wit and wisdom, successfully illuminating a path to better wellness.

There’s no shortage of Boston-themed running in “The Incomplete Book of Running”. While Sagal has run it previously as a qualifier, his 2013 journey as a guide is detailed (Team With A Vision). Next, Sagal reflects upon Jim Fixx’s 1977 book “The Complete Book of Running”, encapsulating it’s discussion of running’s bare essentials (at the time, $20 to $40 run shoes and a pair of shorts were sufficient). Sagal continues to impress with his charitable run accomplishments, detailing his award as top fund raiser in the “Cupid’s Undie Run” for the Children’s Tumor Foundation. He ponders if the $4,000 raised is actually his top running achievement.

A consideration for running without headphones is introduced, then detours into a non-running related subject: Why our Constitution works. After reading it twice I’m still not certain why it’s discussed. Nevertheless, I found it interesting but can understand why some might question it’s inclusion. Next, Sagal takes us through his experience of the Boston Marathon bombing. His vivid descriptions did much for my mind’s imagery of that fateful day.

Reflecting upon both healthy and unhealthy choices, Sagal is forthcoming with his travails of proper weight management through food selection and running. Earlier in life he survived, what he now believes, were episodes of anorexia. Presently, he’s much more at peace with his diet, as well as his physical self, and to the betterment of the reader he shares with us how he arrived at this tranquility. Next, a running accident is shared (Sagal breaks his back due to a car collision). Also, he describes how troublesome GI issues have impacted his running.

Moving on, an endeavor from which Sagal gained a helpful dose of perspective is detailed. He volunteers to discuss his Boston Guide experience and runs with a group of visually impaired students. As a result, Sagal is compelled to re-assess his own troubles. Later, the internet hawks come after Sagal for banditing 20 miles of the Chicago Marathon. Anyone with an opinion on the matter (e.g., @MarathnInvestgr tweets) will be engrossed in this content as Sagal weighs the severity of his sin.

Sagal’s knowledge of training plans is shared. He forgoes the “Run Less, Run Faster” plan (run every other day, off days consisting of cross training, providing time for the body to heal) for a more aggressive plan in a marathon PR push. By 11+ minutes he succeeds, finishing Philadelphia in 3:09. Finally, the book comes full circle as Sagal runs the 2014 Boston edition. He’s compelled to return after the bombing. Sagal contemplates the dangers of running as he had witnessed a death due to cardiomyopathy in Philadelphia. The odds are incredibly small but real. Realizing he’s running Boston that very day, Sagal decidedly moves on from this train of thought. Afterwards, he tells the tale of Jacob Seilheimer’s entertaining Boston (bandit) run. With no running background, and 3 month’s before the marathon, Jacob would drop his weight from 450 to 360 lbs. Jacob doesn’t start the race until all registrants had already done so and finishes in roughly 8 hours. Further details of Jacob’s background are revealed: Lyme’s disease and a brain tumor leading to surgery, radiation, and chemo. The cancer would later return. It’s difficult to not cheer for Jacob.

Darker days now seemingly in the past, a new house, finance, and adding a couple dogs to his life have buoyed Sagal’s outlook. While suggesting his PR attempts have been put to rest, running continues to play a critical role in Sagal’s life.

#DidYouKnow courtesy “The Incomplete Book of Running”: At the 2013 Boston Marathon, a runner and her wheel chair bound daughter were shielded from bomb shrapnel by a relative that was banditing the race.

2 thoughts on “The Incomplete Book of Running”